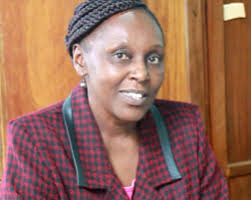 Dr. Catherine Lukhoba is a Senior lecturer at the University of Nairobi and most recently appointed Director, School of Biological Sciences. she is the first woman to hold this position at the College of Biological and Physical Sciences

TCC Africa: Tell me about your research career.

I got into research when I joined the University of Nairobi to pursue my Master’s degree in Botany. I had worked for less than one year but thought I should join an M.Sc. program since I had enjoyed my undergraduate course.

My postgraduate project was on a group of plants called the mint family . I came to realize that there were many others that didn’t smell as nice but were still in the same family since they had similar characteristics, I looked at the plants that were used medicinally in Kenya and I had about 30 different species of members of that family.

From there I applied for my PhD and ended working with almost the same group of plants with a focus on two genera, Ocimum and Plectranthas. In taxonomy one has to do a taxonomical revision where the scientific names of a particular group are reassessed through steps such as comparing characteristics of the plant group, and review of literature previously compiled to confirm the name in the country they are found. I looked at 9 different Ocimum species and about 30 Plectranthas, and their medicinal aspects. I then extracted their essential oils with the intention of carrying out phylogenetic analysis; using the oils to see if they were similar from different species. I only got 5 species due to the insecurity in the region where I was collecting my samples. Using the oil extractions and chemotaxonomic techniques which is the classification of plants and animals based on similarities and differences in biochemical composition, I was able to separate those members into different groups.

At a later stage I got the opportunity to go to Kew Gardens in the United Kingdom which hosts one of the largest herbariums in the world and collaborate with scientist. The Kew Garden herbarium is relevant to Kenyan taxonomy field as it contains an extensive collection from Kenya taken during the colonial period. I got most of the specimen to compare with what I had and I was able to describe new species and variety.

TCC Africa: What are the highs and lows in your research career?

I was able to identify and describe a new species which I named Plectranthus Agnewii after the outstanding scientist Dr. Andrew Agnew who worked and published on plant taxonomy in Kenya.

After completing my PhD, I did not continue with taxonomy but instead focused on ethnobotany which acknowledges the interrelation of community traditional knowledge and the whole study of plants in a region and as a result got three funded different projects.

The first of these projects was a study on medicinal plants found in the Kakamega forest. I received a small grant from the university and was able to work and document my findings.

The second project was on –diversity and utilization of plants in the Lake Victoria basin for medicinal use. The project was funded by VicRES and was a collaboration between Kenya and Tanzania. We made field trips to the region for two years with some of our students who were able to get projects relating to the plants we studied. Two students graduated with PhD originating from this project.

TCC Africa: In researcher’s life how often are they able to identify a new species?

It depends on how long you’ve been working on a particular group. If you work on any group that has not been worked on or one that is extensive the chances are high that you will identify new species.

TCC Africa: How did you finance your post graduate studies?

I was self-sponsored at the beginning of both (MSc and PhD) but a year into each I was awarded scholarships. The MSc degree was sponsored by University of Nairobi while the PhD was a German Education Exchange Service D.A.A.D scholarship.

TCC Africa:  What have been your lows as a women researcher

Majority of my lows came about when I was working on my PhD. I realized how much more vigorous the PhD program was compared to the Master’s degree. I had to depend on self-motivation to endure the endeavors that I faced. At the time I was still a member of staff and that was not easy since I had duties to fulfil at the university. I also had to depend on my funds for field work initially since in the first year I did not have a scholarship.

As a mother, there was lack of balance in my work and research life as I had to prioritize my family over opportunities for research thus delaying the research process.

TCC Africa: How did you get to the administrative aspect of the university?

I got into administration when I was made the examination officer where I had been previously working as an assistant. The examination officer requires one to be more engaged due to activities such as processing exams and awarding various recommendations that will progress the student to the next level. This gave me a certain dedication and consistency to keep working and allocate my time accordingly. On account of this I got to appreciate professional society activities and got into a number of them. I got into the Society for Economic Botany (SEB) through my connection with VicRES project which sponsored my trip to the US where I presented my paper. Consequently, the Kenyan chapter of (SEB) was conceived and has been flourishing for the past 10 years.

TCC Africa: Tell me about your journey to becoming the woman Director of the School of Biological Sciences since the school was established in 2006.

I think that this was through my dedication as the examination officer and also the fact that I had been accustomed to the responsibilities of the role as I had worked closely with the previous directors. Whenever the previous directors were on leave I would take over as the Acting Director.

TCC Africa: During your career you have gone through many specialist training including those provide by TCC Africa. What was your experience through this and what encouraged you to come for more?

One of the things I realized researchers need is to publish and make applications for funding. It is not easy to get funding especially on one or two applications since in most instances returns for applications is quite low. The ways of application also keep changing. One has to know what the funders want from the researcher in order to get a research grant.   This is also the case in academic publishing, which, has constantly been changing and I need to be kept abreast on the latest in scientific writing and publishing.  These are some of the reasons I continuously take part in the training and wish to come to more training sessions.

TCC Africa:  What have you been doing to support early career researchers in their research life cycle whether through mentorship or one-on-one support.

Whenever I have students I try to encourage them to find an area they would like to work in or try influence them to join my area of research and mentor them. At the moment I’m mentoring a student on taxonomy. I have arranged for the student to get extra training so that I can invite her in my projects and hopefully will be able to apply for her post graduate at the end of 6 months. I try looking for areas without capacity and encourage them to pursue get some skills and in turn make them experts.

TCC Africa: Share with me what the future holds in your research life cycle.

I see myself having a project with a number of students contributing at different levels. I also hope to continue working on medicinal plants with an aim to progressing in drug development based on the information retrieved from community practitioners. Most researchers have been modifying compounds or configurations of compounds that medically work instead of going in the field to retrieve the information. In the end they lose out on other compounds available in plants that we can get by how they are used in the community. We should never sideline that aspect of community since this is where we initially got the information.

TCC Africa: Your story is a classic example of someone who successfully got into her academic career by partially sponsoring yourself and making deliberate commitments in the various steps in your research career to where you are now.

Thank you so much for sharing your journey with us.

By TCC Africa and the University of Nairobi Team