No Success at COP26 without a Fair Deal for Africa: Global leaders Share New Research on Benefits of Adaptation Action in Africa 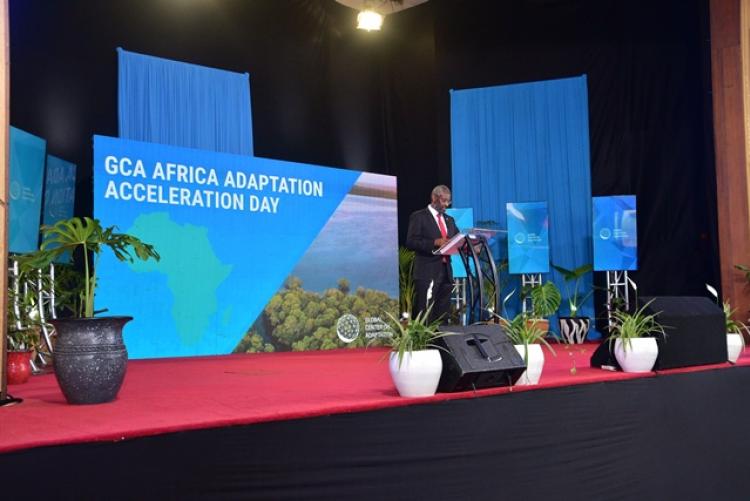 Global leaders, under the leadership of President Uhuru Kenyatta, spoke at the launch of the Global Center on Adaptation (GCA) “State and Trends in Adaptation in Africa Report 2021 – How Adaptation Can Make Africa Safer, Greener and More Prosperous in a Warming World”. the event was held today 26th October 2021 at Taifa hall and it was both virtual and physical.

The Global Center on Adaptation STA 2021 report outlines the economic benefits of climate adaptation on the continent. In addition, it presents the most comprehensive overview of the present and projected climate risks together with a blueprint for adaptation actions for the African continent in the face of climate change.

Ban Ki-moon, 8th Secretary General of the United Nations said ‘’ Today, we are starting a new chapter for Africa. We want to build towards a better future; To build towards bigger things. Only together can we succeed. We must therefore bring adaptation to climate change on to a level footing with emission cuts. The climate change emergency is already all around us and no one is safe’’ he said.

The inaugural lecture was by the Global Center on Adaptation (GCA) CEO Dr.  Patrick Verkooijen who emphasized on adaptation being not just the right thing to do but the smartest thing to do. Dr. Patrick noted that, 'Africa does not need to learn how to adapt; Africa just needs speed it up and scale it up. For COP26 to succeed, Glasgow must deliver for Africa. To do so, it must bring more ambition and more finance to help Africa adapt to the pace of a climate emergency devastating the continent with increasingly serious consequences for the world’s poorest and most vulnerable’’ he said.

On his part the host, the Vice Chancellor Prof. Kiama noted the university has prioritized working with the government and communities to improve on  sustainable development outcomes through innovative approaches for mitigation of climate change causes and adaptation to its impacts. We have established two premier research institutes – the Institute for Climate Change and Adaptation and the Wangari Maathai Institute for Peace and Environmental Studies. These center’s aim to generate scientific evidence related to challenges facing Kenya, East Africa and Africa in the long term with regard to climate change, adaptation, and environmental stewardship of Planet Earth. He further noted The University is ready for partnerships to build human capacities, through programs, that are directly related to climate change and adaptation.

This event comes ahead of the COP 26 summit that will be held in Glasgow from 31 October-12 November 2021.

The conferences are attended by world leaders, ministers, and negotiators but also by representatives from civil society, business, international organizations, and the media. The COP brings all the signatories together once a year to discuss how to jointly address climate change

The COP is hosted by a different country each year and the first such meeting – ‘COP1’ – took place in Berlin, Germany in 1995.